What to see in Galicia: Eight spots in the French Way you cannot miss 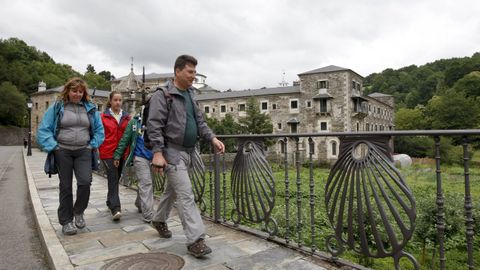 Each one of the stages, from O Cebreiro to Santiago, has places that are worth a visit. Even if you have to deviate a bit from the regular route

Santiago is an mandatory visit during Xacobeo. By plane, train, bus or car… There are many ways to arrive in Galicia's capital city, but only one in which the journey is more important than the destination: the Way of St. James.

In addition to living the pilgrimage experience, walking through any of the Jacobean routes allows you to visit magical places throughout Galicia. All the routes and stages have corners that are worth stopping for, even if you have to deviate a bit from the yellow arrows.

The French Way is not the exception. The most famous and busiest route of the Way starts in France, goes across the Iberian Peninsula, and enters Galicia through O Cebreiro. From there, 155 kilometers and seven stages separate the pilgrims from the Cathedral. However, neither of those who choose this route travel the same amount of kilometers, do the same number of stages, follow the same itinerary nor visit the same places.

Some people go straight to the Cathedral and are left with the image of common places such as the pallozas in O Cebreiro, Portomarín bridge or Monte do Gozo. While others prefer to take the Way at a calmer pace and take advantage of those days of disconnection to go sightseeing. Thus, they are able to visit different places, off the main route, such as Fervenza das Hortas in Arzúa or Castro de Castromaior.

In any case, if you dare to put on your boots and walk towards Santiago, it doesn't matter in which groups you are in. Both, following the yellow arrows or going through its surroundings, there are dozens of places to see and visit. Nature, monuments, history, culture, gastronomy... Everything converges on the Way of St. James. There are plans and places for all tastes.

To follow the official route, we present you with eight places worth visiting, both if you take the French Way or if you wanna make a quick getaway to see the different Galician locations it passes through. Although there are seven stages, one of them can be walked by two different itineraries.

The First stage starts from O Cebreiro and goes to Triacastela. It’s a high altitude route that goes through various peaks between Os Ancares and O Courel mountain ranges. The Second one ends in Sarria and has two different itineraries. One of them goes across San Xil, and the other one, through Samos, a place historically related to the Way.

As for the Third, that connects Sarria with Portomarin, is for many pilgrims the first stage of the Way. From there you can reach the 100 kilometers required to obtain the Compostela. The Fourth stage goes all the way to Palas de Rei in one of the most paved sections of the route.

The way from Palas to Arzúa, going through towns so attached to jacobean tradition as Melide or Castañeda, is the Fifth stage. Then the Sixth ends in Pedrouzo, although many pilgrims prefer continuing to Monte do Gozo. And last but not least, a place that is part of the Seventh and last stage: Santiago. 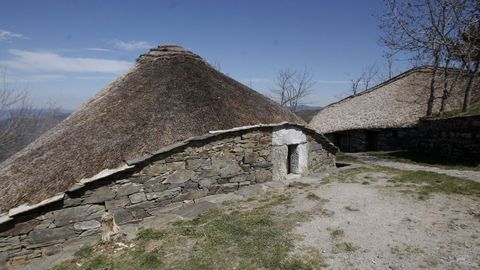 The French Way enters Galicia through O Cebreiro. A small village, located in the mountains, whose daily life is inseparable from jacobean routes. The constant presence of pilgrims is joined by the historical heritage the town treasures. From the oldest still-functioning church along the Way to the thousand-year-old pallozas, its identifying symbol. 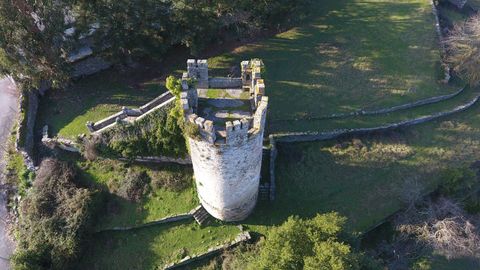 Batallón Tower in the fortress of Sarria. DRONTEC IBERICA

Upon reaching Sarria the view goes upwards. The remains of a castle, known as Torre do Batallón, seem to watch over the town and the Jacobean route that runs through it. Torre do Batallón is the only remnant of a military fortress from the 13th century that was destroyed in the Irmandiñas uprising and rebuilt shortly thereafter. 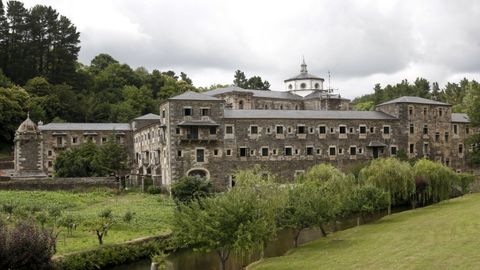 On its walls, Monasterio de Samos (Samos Monastery) tells the history of Galicia. Built in the 6th century, it witnessed all kinds of medieval episodes until becoming a hospital during the French invasion of the 19th century. But it was in the 16th century when its golden age arrived: it was the residence of kings, nobles, bishops and artists. 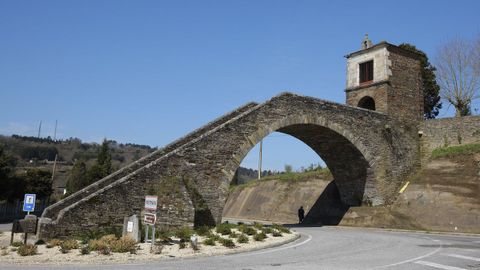 A stop or, rather, a mandatory stretch on the Way. Pilgrims who want to finish the Sarria-Potomarín stage must climb a stone staircase that gives access to the medieval town of Portomarin. Just a last effort, rewarded by the views from the top of the bridge, where Virxe das Neves chapel awaits. 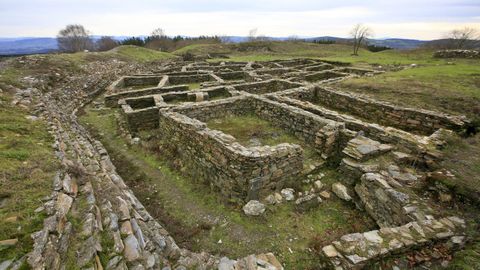 From North to South, the traces of Galicia's Celtic past run through the community. It is not difficult to find «castreños» settlements, but it is rare when its state of conservation allows to appreciate something with non-expert eyes. This is the case of the Castro de Castromaoir, which keeps alive a history much older than the Camino itself. 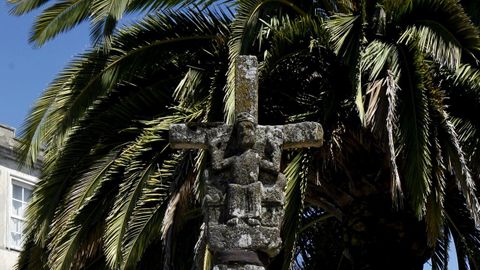 Cruceiro of Melide, the oldest crucifix in Galicia. SANDRA ALONSO

Melide is the crossroads of the French and the Primitive routes. This intersection of routes has to do with the patrimonial treasure that it guards: the oldest crucifix in Galicia, according to Castelao. Whit Gothic style, it dates from the 14th century and it is located at the entrance of the town, welcoming the passing by pilgrims. 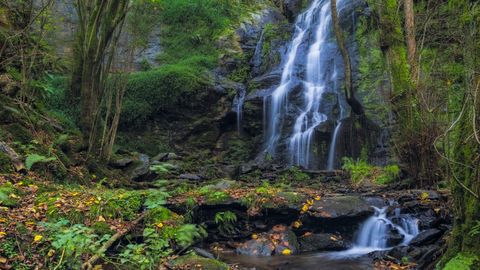 The French Way has sections that run through in the middle of nature. An inviting path for those who are looking for an inner journey. Between the green landscape, the fresh smell of plant life, and the sound of the falling water, Ferveza das Hortas, located in Arzúa, is one of those places that brings one's mind to a state of peace. 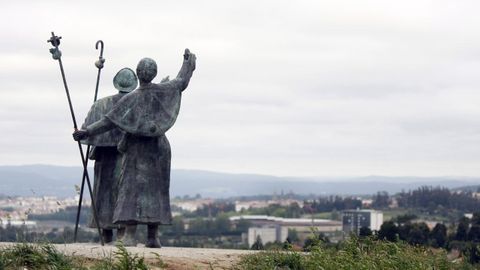 Statue of the two pilgrims in Monte do Gozo. BEA OTERO

The name Monte do Gozo is no accident. This stop is located at the gates of Santiago and provides walkers with the first image of the Cathedral. A moment well represented by the statue of the two pilgrims who crown this place. An essential stop that marks the beginning of the end of the Way.

The French route goes through many more towns, villages, forests, rivers and mountains. You can visit mountain ranges such as O Courel or Os Ancares. Rest in villas like Pedrouzo or Castañeda. Get to know fountains as Santa Irene, granaries like A Rúa or the mills located in Reche. You could also refresh yourself in rivers like Furelos. Enter churches like Santa María de O Cebreiro, pilgrims' hospitals as A Magdalena or castles like Pambre. Learn something new in museums like La Mel and admire monuments like the Pilgrim of San Roque... And, for all that, you just have to start walking towards Santiago.