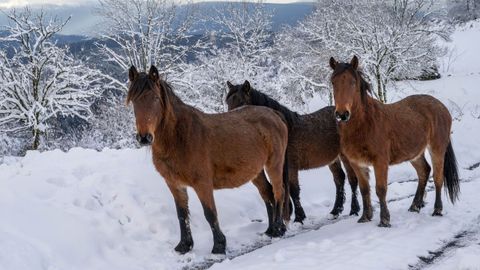 Hiking across snow-covered peaks, visiting delightful hamlets nestled among the mountains or skiing on the slopes of Manzaneda are all great options for a winter getaway.

Snow in Galicia. The winter season brings Christmas card landscapes aplenty. And while the Mayor of Vigo boldly claims that the city has the best snow in the world, the truth is that it is rarely covered in white. However, other parts of Galicia are at a sufficient altitude to remain snow-covered over the coming weeks, mostly on and around the mountains of Lugo and Ourense.

Hiking in mountain ranges such as Os Ancares, visiting villages where you might easily stumble across Father Christmas’ grotto, such as O Cebreiro, or skiing in resorts such as Cabeza de Manzaneda are just some of the things you could plan for the coming days and weeks in our top five recommended destinations for enjoying some quality snow. Are you up for a getaway? 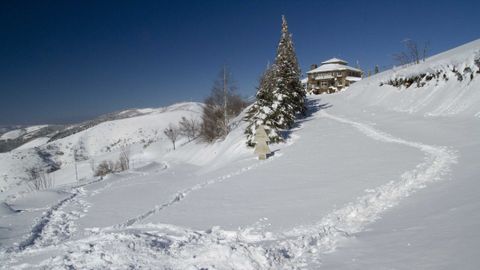 A horizon of snow-capped peaks. That is what you will see if you visit Os Ancares at this time of year, a mountain range that acts as a natural border between Galicia and León. The landscape is breath-taking in any season, though the arrival of the first snowfall accentuates its natural splendour and adds to the charm of the already delightful hamlets dotted across its valleys. It is the ideal destination to enjoy nature at its finest amidst hiking trails and sub-zero temperatures.

The mountains of Os Ancares reach almost two thousand metres into the sky, so the peaks are usually shrouded in white. It is also a protected area due to its rich biodiversity. Its forests, featuring native species such as European oak, chestnut and holly trees, were home to the last specimens of brown bear that used to inhabit Galicia. Although the area has been inhabited since pre-Roman times, as the traditional dwellings (pallozas) in the hamlet of O Piornedo show, it was all but cut-off from the rest of the world for a long time. This isolation helped the area build its own natural and cultural heritage, all covered in a layer of white at this time of the year. 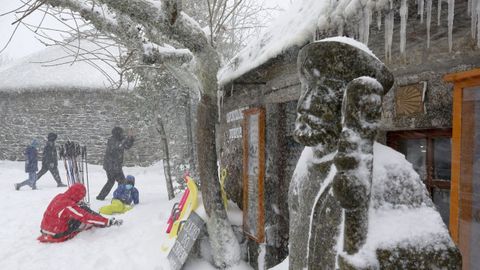 You might well have seen pictures of pilgrims surrounded by snow and traditional huts known as pallozas. What you’ve seen is O Cebreiro, a small village located 1,300 metres above sea level in the mountains of Lugo, lying between the mountain ranges of Os Ancares and O Courel. It is the gateway to the French Way in Galicia and a charming place that becomes even more magical with the first snowfalls of the season.

The roofs of the pallozas —circular Celtic constructions— are covered in snow to form one of the most sought-after postcards of the Galician winter. If you’re heading there to take the obligatory photo or simply take in the charm of the village, be sure to also bask in the warmth of its restaurants and sample the local cuisine. O Cebreiro, like many of the towns and villages through which the Camino de Santiago passes, has a generous choice of hotels and restaurants adapted to all tastes and pilgrims. 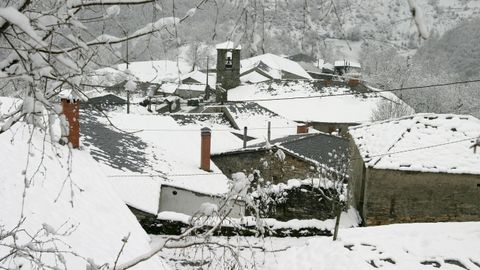 Snow in the hamlet of Pacios, in the mountains of O Courel. ALBERTO LÓPEZ

Much like Os Ancares, the O Courel mountains are another place that transform into a Christmas postcard with the arrival of winter. This mountain range, located in the south of the province of Lugo, has lower peaks than its northern neighbour, but is equally spectacular when covered in snow. It is also a protected destination due to its enormous ecological value and biodiversity.

Aside from its natural splendour, O Courel has a rich ethnographic and historical heritage that becomes even more enthralling when the first snowflakes fall. Stone houses, wooden balconies and slate roofs, all clustered together in small hamlets. Many of them have been restored and listed as sites of national tourist interest. Visiting them takes us on a trip through many Christmases past. 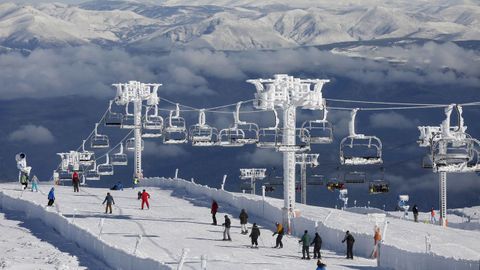 The start of the snow season is often synonymous with the start of the skiing and snowboarding season. Winter sports are a perfect option for tourists looking for more active pursuits despite the low temperatures. Galicia has just one ski and snowboarding resort, namely Cabeza de Manzaneda. The snow level lies between 1,500 metres from its base and 1,800 metres from its summit, so there is usually plenty of fun to be had until Easter.

The resort provides ski, snowboard, sledge and snowshoe equipment rental, as well as courses in various winter sports so that everyone can try out the 20 or so slopes that the resort has to offer. All of this is surrounded by breath-taking scenery that can be enjoyed from the chairlift. In addition to winter activities, Cabeza de Manzaneda offers a wide range of outdoor adventure activities, including a park, a zip line and horse riding. 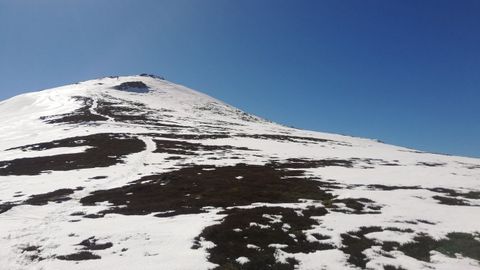 If there is one place in Galicia where snow-capped peaks last throughout much of the year, it is Pena Trevinca. It is the highest point in the whole of Galicia, reaching 2,127 metres into the sky, so it is covered in snow well into the spring. Located in the only Galician massif that exceeds two thousand metres in altitude, in the province of Ourense, it is an ideal place for mountaineering enthusiasts and the bravest hikers.