Things to see and do in Galicia: ten museums to visit on a rainy day 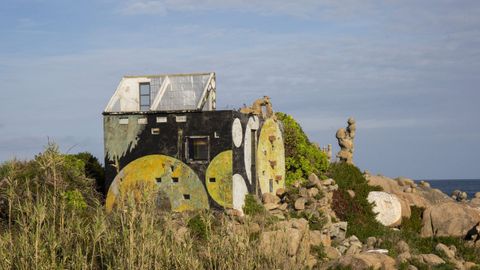 Art, the sea, technology, history, railways and wine are just some the themes of the most original exhibitions going on within the region

Rain, snow, hot temperatures, clouds, wind... Galician weather features all kinds of atmospheric phenomena... and often on the same day! Hail in the morning followed by bright sunshine in the afternoon? You bet. In Galicia, there are always loads of things to do, come rain or shine. «Se chove, que chova», as they say in Galicia, meaning ‘Let it rain’. And in a part of the world where a good raincoat is an absolute must in any season, there are plenty of leisure alternatives for those rainy days.

You can’t go wrong with a museum or two when the heavens open. Galicia has rich cultural, historical, natural and ethnographic heritage on display in every corner of the region. You can find all sorts of collections relating to the world of art, the sea, technology, Roman civilisation, the railway and even wine. There is something for all tastes and ages. From interactive exhibitions, such as those found in the National Science and Technology Museum (MUNCYT) in A Coruña, to beachside sculptures at Museo Man de Camelle. Take your pick!

Museo do Mar, in Vigo 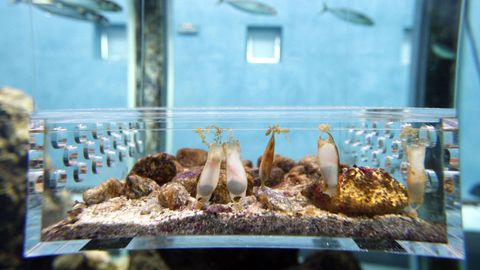 Worried about the rain if you visit Vigo? Well don’t, because the city has many museums with all sorts of things on display. Most of them can be found on Rúa Policarpo Sanz, the so-called golden mile of art. But it is also worthwhile to escape the crowds and move closer to the coastline, with a great choice here being the Bouzas district. There, on the tip of O Muíño in Alcabre, where an old cannery used to stand many years ago, we can find the Museo do Mar de Galicia (Museum of the Sea).

The history of both the city and the wider community of Galicia has always been linked to the sea. Indeed, there are numerous maritime museums to be found along the Galician coastline. The museum in Vigo is one of the most extensive and boasts several exhibition spaces to take visitors on a journey into the briny deep.

Aside from the temporary exhibitions on show, there is a permanent collection focusing on the economic and social history of the Galician fishing industry. It provides a fascinating insight into all methods of extraction, including shellfishing and aquaculture, as well as preservation, from salting to freezing, and the actual selling of the sea produce. The museum also features an aquarium where you can view the ecosystem of the Cíes Islands, an archaeological site, various fishing vessels and a lighthouse. 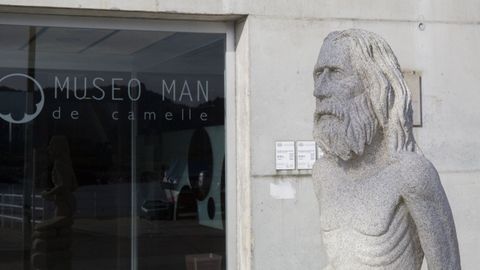 Also linked to the sea, though looked at in a different light, is Museo Man de Camelle. This open-air space located in Camariñas is the legacy of Manfred Snädinger. Better known as Man, this German native came to the village of Camelle on the Costa da Morte in the 1960s to live as a kind of hermit beside the sea and in harmony with nature. Over the course of his life, he devoted himself to creating sculptures and works of art from objects washed ashore by the tide. He created a sort of garden-museum that stands on the breakwater of the parish, where he built the hut he lived in until 2002, when the oil slick from the Prestige flooded his life’s work and condemned the artist to an early death, barely a month after the ship had sunk.

The Museo Man de Camelle showcases the artist’s legacy in several places within the parish. Aside from the open-air stone garden, visitors can take in exhibitions of plastic sculptures, decorated bones and shells, paintings, notebooks, photographs and personal objects of the artist. The exhibition also includes the sketchbooks in which Manfred would ask visitors to draw what they wanted. 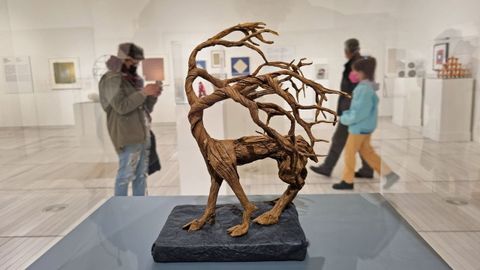 Art is also one of the pillars of the Provincial Museum of Pontevedra. And we do mean one, since the space combines archaeology, history, ethnography and culture to offer one of the most extensive collections in Galicia. Within its walls, you can find everything from Bronze Age utensils to paintings by Cossío, Gothic-style sculptures by Master Mateo and traditional instruments such as the hurdy-gurdy.

The museum has permanent collections dedicated to art from medieval times through to the present day, along with numismatics, the sea, crafts and ethnography. It also hosts temporary exhibitions on all kinds of themes.

Casa do Patrón, in Lalín 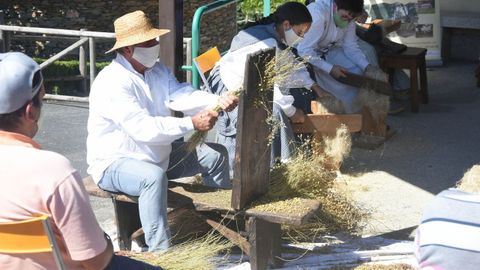 If your favourite rooms in the Museum of Pontevedra are those devoted to ethnographic exhibitions, you simply must visit the Casa do Patrón ethnographic museum in Lalín. This eco-museum of the rural world takes you on a journey back in time through Galician traditions, culture and gastronomy. More than 4,500 pieces make up the permanent collection, which is divided into themed rooms to create replicas of spaces such as a kitchen, a tavern, a chapel or a school. It also has a restaurant where you can sample typical dishes, such as cocido (stew) or caldo (broth).

The Casa do Patrón museum is located in the village of Codesada, surrounded by nature. The museum has a recreational area on the banks of the river Asneiro and a bio-healthy area with two restored and fully functioning mills. Other outdoor options include a hiking route that takes you to the Doade hillfort or another route that meanders through the local countryside. It is also a great museum to visit with children, as it features a wide range of workshops and activities. 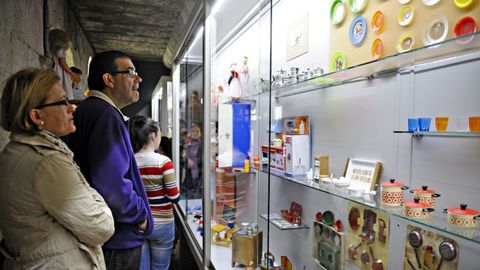 Another child-friendly museum is the Museo do Xoguete toy museum in Allariz. A space where both little ones and grown-ups can marvel at the collection of some 1,500 toys from the 20th century. A perfect outing for grandchildren and grandparents alike in what is one of Galicia’s most beautiful villages. 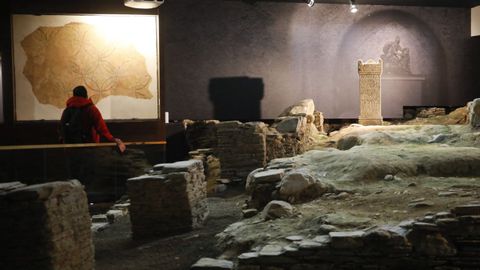 Before we leave the province of Ourense, there is another must-see thematic exhibition, at least for wine tourism lovers. The Museo do Viño de Galicia, located in the rectory house of Santo André de Camporredondo, is entirely devoted to Galicia’s rich wine heritage. The museum building, located right in the heart of the O Ribeiro region, was designed for the production, storage and distribution of wine to Santiago.

The permanent exhibition is devoted to the techniques of vine cultivation and winemaking. Visitors traverse eight rooms on a journey through the wine production process, from vine to glass. It also has spaces dedicated to Galicia’s five designations of origin. 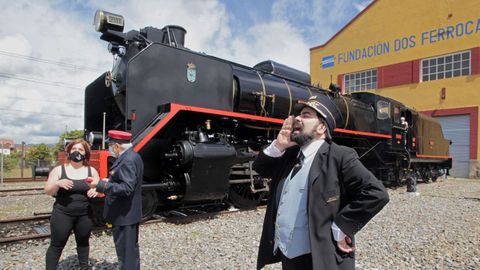 If there is a thematic exhibition that is more topical than ever, it is the Museo do Ferrocarril, or Galician Railway Museum. With the arrival of the AVE high-speed train link in Galicia, visiting this museum at Monforte railway station is a great option. Indeed, the town’s history has always been closely linked to railway travel, as it is one of the main railway junctions in northwest Galicia.

The museum has been set up in one of the old station workshops and retains a lathe, the forge and the former staff quarters from its operational life. The rest of the exhibition features all sorts of railway paraphernalia in perfect condition. From vintage Hogwarts Express-style locomotives to the forerunners of the high-speed trains we now know. 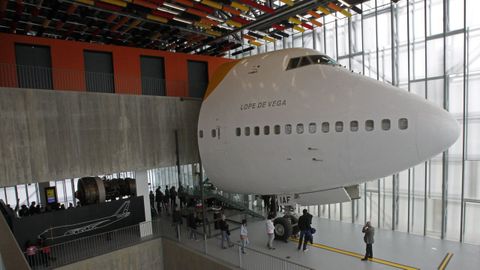 From the trains in Monforte, let us now visit aircraft in A Coruña, more precisely the cabin of the Boeing 747 Lope de Vega that brought Picasso’s Guernica to Spain. Indeed, the aircraft is one of the icons of the National Museum of Science and Technology (MUNCYT) and A Coruña is the only city in the world where visitors can climb inside the cockpit of this particular model.

The MUNCYT conserves more than 15,000 pieces, including scientific instruments, technological apparatus, vehicles, machines and industrial tools from the 16th century through to the present day. You can see everything from the ancient lighting mechanism of the Torre de Hércules lighthouse to the first particle generator. It is also an ideal place for introducing children to the wonders of science, as the museum functions as an interactive space.

Another of Galicia’s unique exhibition spaces can be found in the city of Lugo. The city is home to the only complete Roman wall in the world and retains an intact relic from its past under its foundations. An archaeological excavation unearthed the ruins of a centurion’s dwelling: the Domus do Mitreo.

Converted into a museum excavation, the remains provide a fascinating insight into the Roman civilisation that inhabited Lugo some 2,000 years ago. The house has a temple dedicated to the sun god Mithras, so the visit is also an opportunity to learn more about the Roman cult. It is also the only place in the city where the foundations of the wall can be seen, as the house was buried when this iconic structure in Lugo was built.

Speaking of icons, we could hardly omit the Cathedral of Santiago from our list, especially as 2022 is a Jacobean holy year. But on this occasion, we will not be focusing on the cathedral’s magnificent façade, nor on the tomb of the Apostle, and nor on the Pórtico da Gloria. For under the basilica is the Cathedral Museum, which showcases the temple’s historical, artistic and archaeological heritage. In addition to the numerous pieces on display, such as the stone choir by Master Mateo, you can visit the cloister, the chapterhouse, the library, the treasury, the chapel of relics, the tapestry collection, the crypt of the Pórtico da Gloria and the Pazo de Xelmírez.