How much does it cost to do the Camino de Santiago: from low cost to premium? 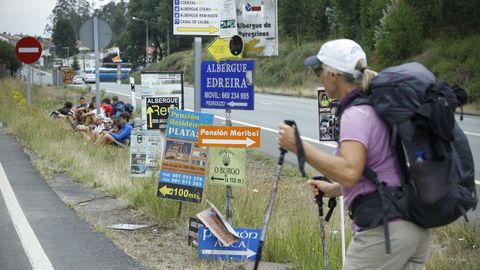 Travel agencies are quick to point out that the type of accommodation, the menu and the services you arrange can all make a big difference to the cost of a tourism experience that can cater to all tastes and wallet sizes.

Most people agree that walking the Camino de Santiago is a truly unique experience. Just listen to the testimonies and accounts of the pilgrims who make their way to Santiago de Compostela each year following one or other of the routes; and each of them with his or her own background, preferences and needs. Unsurprisingly then, it is an experience that can be adapted to the needs of absolutely anyone who wants to give it a go... even to the size of their wallet. Although it typically falls into the low-cost tourism category, there are plenty of alternatives for those looking for a more deluxe version. Travel agencies are quick to point out that the type of accommodation, the menu and the services you arrange can make a big difference to the total price and they are keen to have a go at answering our question: So how much does it cost to walk the Camino de Santiago?

According to Pilgrim, which specialises in the Camino de Santiago, “The price will ultimately depend on your choice of accommodation, how long the route takes and the kinds of services you arrange, among other factors. You can do a low-cost Camino, or go for a luxury pilgrimage,” noting also that the route you choose can affect the price as well. If you choose the Northern Way (Camino del Norte), which traverses the Basque Country, prices will typically be higher, while the English Way (Camino Inglés), which only goes through Galicia, would be a cheaper option.

Where to sleep: from public hostels to luxury rural tourism

The biggest price difference lies in the type of accommodation you choose. While thriftier pilgrims opt for hostels, those after a luxury experience are more likely to choose hotels or rural tourism lodging. If you want to go the low-cost route, your best bet would be to try to find lodging in one of the establishments adhered to the public network of the Xunta (government of Galicia), which cost just eight euros per person per night. The biggest drawback is that during peak season (which this year seems to be all year-round, as it’s Holy Year) it means getting up really early most of the time and travelling light. 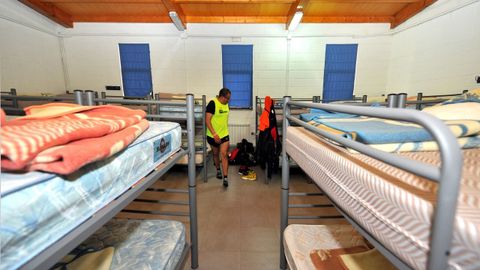 The hostels, in which you share a room with other pilgrims, are the cheapest accommodation on the Camino de Santiago. ANGEL MANSO

That said, staying in private hostels wouldn’t push up the price by too much, as they cost around ten to 12 euros, with some bargains to be had for as little as six euros and a few more expensive options at around 14 euros. To give an example, the five stages running from Sarria to Santiago could cost between 40 and 60 euros. If you choose to start your pilgrimage in Lugo, without sleeping first (transport permitting), you could bring the total price down to as low as 32 euros.

If you wanted to do a more premium version of the Camino, you could choose luxury hotels or rural tourism accommodation. The travel agencies we talked to offer various options, depending on the services you wish to include. For a six-night pilgrimage from Sarria to Santiago, Tu Buen Camino offers an accommodation-only package for 459 euros, while Pilgrim gives a price of 440 euros. However, more discerning pilgrims often choose to include breakfast, if not more, which would raise the budget to 508 and 495 euros, respectively.

Ramón Méndez, manager of Tu Buen Camino, explains that most travellers ask for everything to be covered on a half-board basis. For this, his agency would offer a price of 577 euros, while at Pilgrim it would cost 615 euros. Pilgrim also remarks that “most patrons arrange additional services, such as equipment transfers.” A complete package including these extras would cost you 607 and 635 euros, respectively. 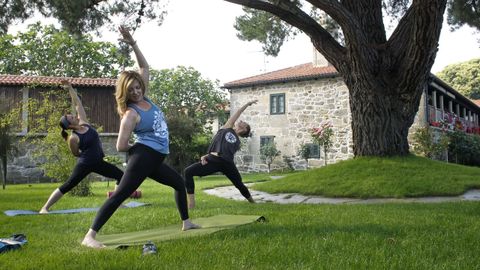 At Galiwonders they have a deluxe package that goes one step further and includes only superior accommodation. As it’s aimed at pilgrims looking for the utmost luxury, the regime would be half board, including breakfasts and dinners and luggage transport. The agency points out that while the cost ultimately depends on the dates and the number of people, “For one person in a single room, the price would be roughly 950 euros with half board, or 800 euros without dinners.”

Food: from cooking at the hostel to eating out in restaurants

Food is another of the big factors affecting the price of the Camino de Santiago. Many restaurants offer the so-called pilgrim’s menu, which costs around ten euros, or offer a wide variety of filled baguettes or sandwiches, which are even cheaper, typically costing between three to six euros. However, for those looking for true low cost, the best option would be to shop at the supermarket and then put your apron on!

“Hostels normally have a communal area with kitchen and microwave,” explains Ramón Méndez, who reckons that for those who want to use the ‘shop and cook’ option while doing the French Way from Sarria, the total cost would be around 30 to 40 euros, though of course this varies from pilgrim to pilgrim. However, it’s best to buy only what you’ll actually need for the stage. After all, you’ll be having to carry around that shopping with you in your backpack.

For those who like to eat well, costs can also vary depending on the type of accommodation you choose. If you’ve opted for half board, you’ll still need to pay for your lunch. According to food journalist Laura García del Valle, a quality meal in a restaurant will set you back around 20 euros: “On the French Way at least, the restaurants tend to be very cheap, even the good ones.” That said, you can go as high as you want if you’re willing to pay for it. While the bill may be higher depending on how much you eat, remember that it’s never a good idea to eat too much at midday if you’re going to be walking in the afternoon.

The pilgrim's kit: what to take with you on the Camino de Santiago (Way of Saint James)

In the case of breakfast and if travelling from Sarria, Tu Buen Camino gives a price of 49 euros for six breakfasts, while Pilgrim offers 55 euros. That would give an average price per breakfast of between six and nine euros. For dinner over six nights, Tu Buen Camino gives a price of 79 euros, Pilgrim 120 euros and Galiwonders 150 euros. If we take the 150-euro deluxe option, dinner would cost around 25 euros per day. On average, a high-end menu for one day would cost around 55 to 60 euros. If you walk the French Way from Sarria, it would cost you around 300 euros, 350 tops.

Other services and expenses

Pilgrims who choose the low-cost version should have no further costs once their accommodation and food have been covered. That said, the agencies advise taking some money with you to cover any unforeseen events or unpleasant surprises.

“It’s fairly common to have to spend a bit of money at the pharmacy, especially if the dreaded blisters appear,” remarks Ramón Méndez, who estimates that a cushion of around 100 euros should be more than enough. 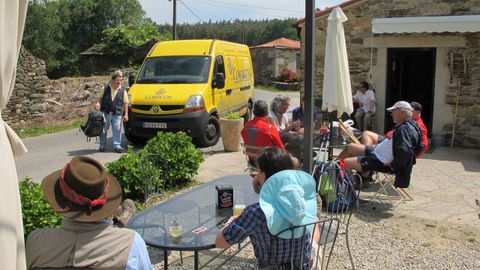 Those who opt for the deluxe version tend to arrange at least the rucksack transport service, which in the case of Correos (the Spanish postal service) costs around four euros per stage. If we look elsewhere, prices vary from four to seven euros. The French Way from Sarria usually includes a specific package or bundle that costs between 20 and 30 euros for the whole route.

From that point forward, a “premium” pilgrim can tag on pretty much anything else they like, such as transport from the airport, massages, guided tours, or even souvenir shopping, making it almost impossible to give an overall budget.

However, if we based our calculations on the French Way from Sarria and without factoring in additional costs or transport to the starting-point stage (which can vary enormously, depending on where the pilgrim is coming from), the low-cost version could set you back between 100 and 150 euros, while the deluxe experience could easily reach a thousand euros.

Things to bear in mind before setting off

Aside from the costs described above, you’ll also need to add on the cost of equipment and material, which can vary wildly, depending on what you need and what you already have before setting off. If you need to buy everything new, your shopping list (and approximate prices ? consulted in online shops) should include hiking boots (20 to 200 euros), three pairs of socks (five to 90 euros), one pair of trousers (ten to 80 euros), three breathable, sweat-proof T-shirts (12 to 120 euros), a fleece (ten to 65 euros), a rain jacket (six to 20 euros), a 30?40 litre backpack (25 to 120 euros), a neck warmer, a cap or hat, Vaseline (four to ten euros), an anti-blister kit (about ten euros), sun cream (six to 20 euros), a water bottle and a first aid kit.