Things to see and do in Galicia: ten places worth a detour from the Camino Primitivo 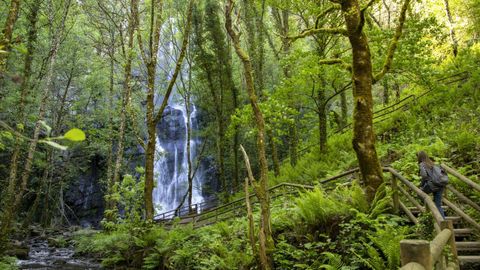 The route, which links Oviedo with Santiago de Compostela following the footsteps of King Alfonso II, takes pilgrims through the very origins of the Jacobean route, the history of Galicia and some of the most beautiful scenery to be found in and around the mountains of Lugo.

Who was the first person to make the pilgrimage to Santiago de Compostela? It is a question so difficult that not even the experts can give an exact name. According to Jacobean tradition, it was King Alfonso II who first made the trip to Santiago after the remains of Saint James had found their final resting place there, although there is no documentary trail supporting this. That is why his route from Oviedo, where the royal residence was located in the 9th century, is known as the Camino Primitivo (the Primitive Way). The Primitive Way takes pilgrims through the very origins of the Jacobean route, as they take in the history of Galicia and some of the most beautiful scenery to be found in the mountains of Lugo.

It is one of the most physically demanding routes, because it crosses much of the Asturian mountain range and the mountains of Lugo, but your efforts will be rewarded by the stunning landscapes and nature on display. Pilgrims will discover magnificent scenery as they take in the rich heritage that is perhaps at its finest in and around Lugo. The walled city of Lugo is, in fact, the starting point for those pilgrims who are only looking to complete the last 100 kilometres of the route. However, we definitely recommend doing the entire route so you have more time to make stops or get off the beaten track, as there are hidden treasures to be found beyond the yellow arrows.

Castle of A Pobra de Burón 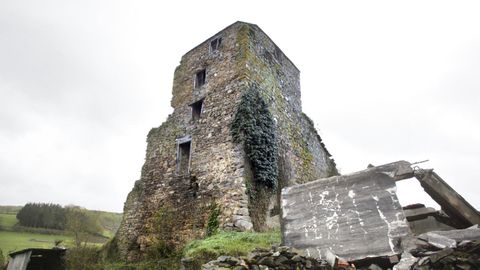 The Primitive Way enters Galicia through the Alto do Acevo, a mountain standing 1,100 metres above sea level that belongs to the municipality of A Fonsagrada. Just before you reach the town, you can find the first fork in the route, more precisely in the parish of Paradanova. Although most pilgrims choose to continue on to the main town in the region, there is an alternative route that passes through what was once the municipal capital: A Pobra de Burón.

Surrounded by nature, this route B allows you to discover the natural beauty of the route and the rich heritage of the local area. A Pobra de Burón plays an important role in Jacobean history. It once had four hospitals for injured pilgrims and boasts the remains of the castle of the Counts of Altamira. It also has a fascinating street map featuring names such as Fidel Castro, Mao Zedong or Marshal Zhukov. 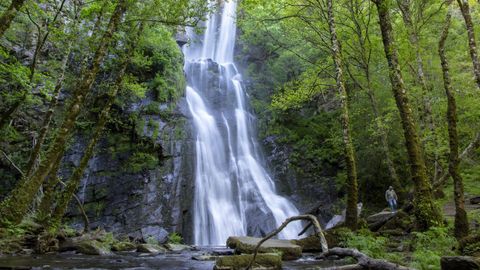 The mountains of Lugo hold numerous treasures, including the highest waterfall in Galicia. Located in the municipality of A Fonsagrada, the Seimeira —the name given to the waterfalls in the area— of Vilagocende plunges 54 metres. Taking a dip in the pool that forms at its feet, or simply enjoying this natural jewel in all its glory without getting your feet wet, is reason enough to venture off the main route of the Primitive Way. And as you make your way to this fervenza, you are sure to discover some of the native fauna and flora to be found within the riverside woods. The Porteliña river meanders and zig-zags, flanked by trees such as English oaks and pines. 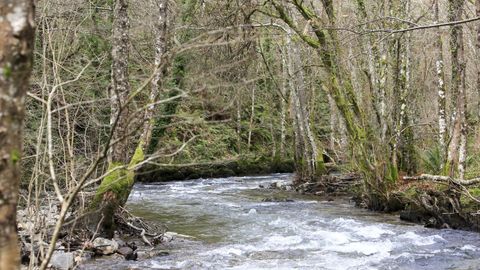 If you want to discover the local forests, one of the finest examples is just a few kilometres away. The Fraga da Marronda woods, in Baleira, are home to more than 170 plant species, such as oak, chestnut, holly, hazel, birch and blueberry. But if there is one that stands out from the others, it is the beech. This natural paradise serves as the south-western cut-off point for this particular species in Europe and is indeed one of its main reserves. Visiting the site is also a great opportunity to glimpse some of its inhabitants, such as wild boars, foxes, wolves, squirrels and even peregrine falcons. It also features two waterfalls: Acea da Serra and Pozo da Ferrería. 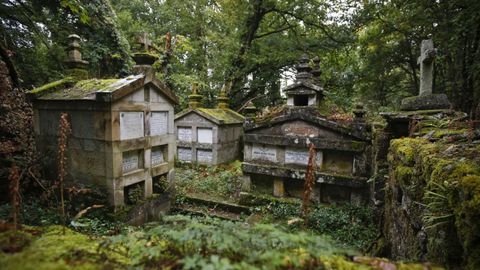 Cemetery of the abandoned town of Soutomerille, in Castroverde ALBERTO LÓPEZ

Hidden within the countryside you can also find the tiny village of Soutomerille, in the municipality of Castroverde. A place where the green of the ivy intermingles with the grey of the stone to create a magical and ghostly atmosphere. Four houses that belonged to wealthy families, a pre-Romanesque church and a small cemetery make up the hamlet.

Although it has been abandoned for decades, its ruins are a jewel in the heritage of the region because of the history that lies within its walls. In fact, many medieval pilgrims left their footprints there, waiting for a modern-day pilgrim to decide to take a detour off the Camino and visit a village that has been frozen in time. 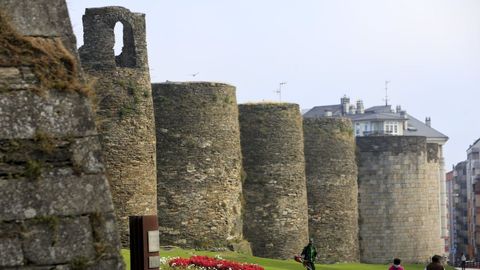 The long-abandoned hamlet of Soutomerille is in stark contrast to Lugo’s most famous and best preserved landmark. The city’s walls are the only ones dating back to Roman times that remain intact across their entire length. They have been standing for 17 centuries and, while they were originally built for defensive purposes, they now offer a delightful walk for visitors, with views over the historic city centre. Declared a World Heritage Site by UNESCO, the walls still preserve 71 of the 85 towers they once had and feature ten gates that have been opened at different times throughout the city’s long history. Each of them is a work of art in itself, through perhaps the most outstanding is the San Pedro gate, which serves as the entrance to the Primitive Way. 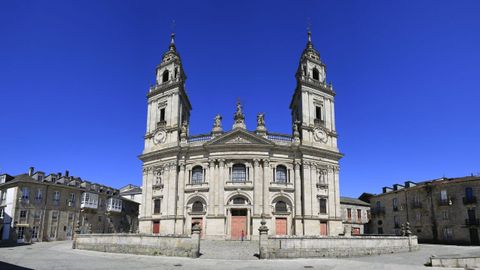 Lugo was also an important enclave for the Church. You only have to walk through the historic city centre to find temples, convents and seminaries from all periods and artistic styles. If we had to pick one, however, it would have to be the cathedral. Built between the 12th and 13th centuries, its amalgam of architectural styles is a journey through the history of art. From the Romanesque design of its ground plan to the neoclassical architecture of its façade, or perhaps the Gothic stylings of its ambulatory or the Baroque influences of its cloister. It also houses treasures such as the Blessed Sacrament, as the representation of the chalice and host is known. It so happens to be the only temple in the world where this image is permanently displayed. It is an obligatory stop for pilgrims traversing the Primitive Way, who are able to visit three of the main cathedrals in the north of the peninsula, together with the cathedrals of Oviedo and Santiago. 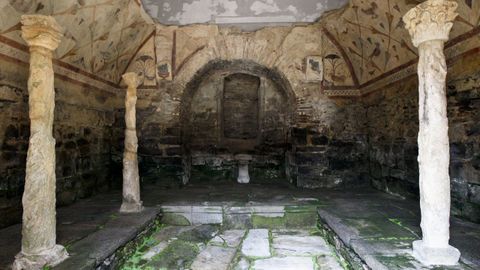 Still within the municipality of Lugo, there is another temple that is certainly worth a visit. Santalla de Bóveda —or Santa Eulalia de Bóveda— has been the subject of constant research since its discovery in 1926. The latest studies place its construction in the late Roman era, around the 4th century. Indeed, the main hypotheses about its origin suggest that it was once a pagan temple from Roman times, later converted to Christian worship. However, its most famous feature —the frescoes adorning its interior— were painted in the 7th century, according to the latest studies. Like the frescoes, there are many other mysteries and unknowns surrounding the building. Would you like to play the sleuth and attempt to decipher them yourself?

The oldest cruceiro (calvary) in Galicia 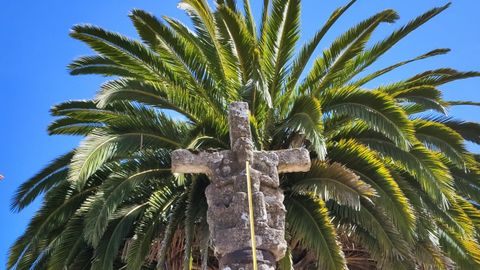 The Primitive Way meets the French Way in Melide. And at this crossroads we can find a rather aptly shaped historical jewel. None other than the oldest cruceiro (calvary) in Galicia, according to Castelao’s writings. In Gothic style, this 14th century monument welcomes pilgrims arriving via the French Way. There is no excuse not to search it out! 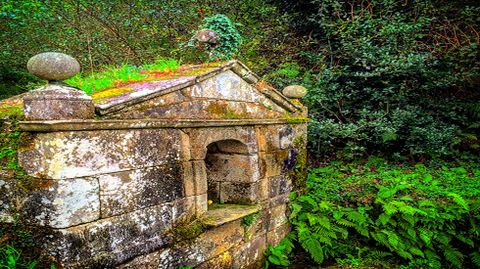 The Primitive Way is not only an odyssey through the origins and history of the Jacobean route, but also a journey through the myths that surround it. A great example of this is the magical powers that the Fountain of Santa Irene is said to possess, located in the municipality of O Pino, one stage away from the cathedral. According to legend, he who washes his face in its waters will enjoy eternal youth. Would you care to find out? In this particular case, you don’t even have to deviate from the route. All you need to do is to make a stop along the way. 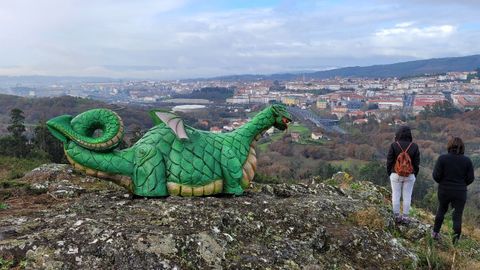 Mythological path of Monte Viso, in Santiago xoan a. soler

Magic is once again present at the gates of Santiago. Monte Viso, located near the entrance to the Camino via Monte do Gozo, was converted into a theme park of sorts following the construction of a mythological trail in late 2020. Since then, it has been inhabited by statues of fantastic creatures straight out of Galician oral tradition. Pilgrims will find themselves among mouros, meigas, the coca —a dragon— or Breogán himself if they choose to visit Monte Viso to take in the views of the cathedral, which keenly awaits their imminent arrival. 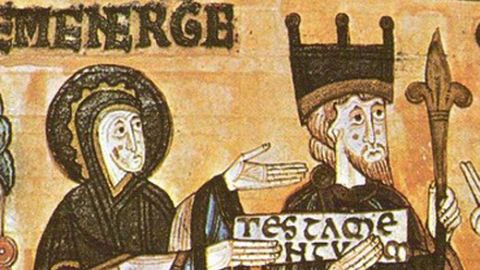 Who was the first woman to walk the Camino de Santiago?

Jimena of Asturias, Matilda of England, the Infanta Urraca... There are several contenders for the title of first woman to have made the pilgrimage to Santiago. However, the experts agree that, as with male pilgrims, the general lack of documentation from the period makes it all but impossible to identify the first female pilgrim who knelt before the tomb of the apostle. Although women now account for most of the pilgrims according to the official statistics of the Pilgrim’s Office (52% of the compostela certificates of completion were issued to women in the first half of the year), the following question is left hanging in the air, much like the botafumeiro (thurible) during the Day of Santiago Apostle every 25th July: Who was the first woman to walk the Camino de Santiago?